Shares of home furnishing chain Bed Bath and Beyond (NASDAQ:BBBY) extended their recent surge on Tuesday. The stock was up by more than 70% during intraday trading, bringing its total monthly gains to a staggering 450%. At the beginning of August, BBBY was trading for just over $5.00 per share. Now, just two weeks later, the stock hit an intraday high price of $28.00, invoking memories of other short squeezes like AMC (NYSE:AMC) and GameStop  (NYSE:GME).

Chatter really picked up on August 5th which was the first big move higher during this recent short squeeze. By August 8th, BBBY Twitter and BBBY Reddit discussion was off the charts. But what led to all of this?

Why is Bed Bath and Beyond Squeezing?

There are likely a number of different reasons why this BBBY short squeeze is taking place. First, the overall sentiment on the market has improved. The major averages have clawed back some of their losses and the S&P 500 is out of bear market territory.

Second, GameStop Chairman and Meme industry legend Ryan Cohen owns a 10% stake in Bed Bath and Beyond. It was also recently revealed that his venture capital firm RC Ventures bought way out-of-the-money calls with strike prices between $60 and $80 that expire in January of 2023. It is a sizable bet on a company that is struggling both financially and operationally. Cohen famously advised Bed Bath and Beyond to restructure its business and sell off its Buybuy Baby brand.

Finally, the massive short interest combined with BBBY being the most trending ticker on r/WallStreetBets is the perfect recipe for a retail-led short squeeze. It’s being talked about more than stocks like GameStop, AMC, and Tesla (NASDAQ:TSLA) and it isn’t particularly close: 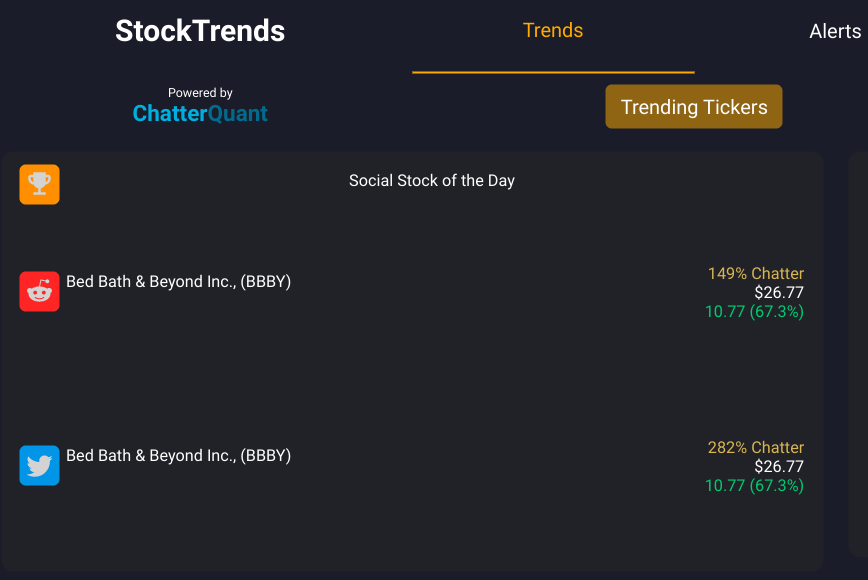 How High Will BBBY Short Squeeze?

In an interesting contrast, BBBY’s short squeeze has come amidst a slew of analyst downgrades. These include notes from B. Riley which downgraded the stock to a Sell rating and Loop Capital which famously slapped a $1.00 price target on the stock.

Even as it appears that most of the squeezing has likely already taken place, it is difficult to count out further movement due to the overwhelming sentiment on social media. It’s the first short squeeze frenzy that we have seen in over a year and the exuberance behind the stock is clear. Once again, social media has been the catalyst of a historic short squeeze, which begs the question: which stock will be next?